How are company scores calculated?

The right side panel on VentureRadar company profiles shows a number of metrics that are used to measure the company. 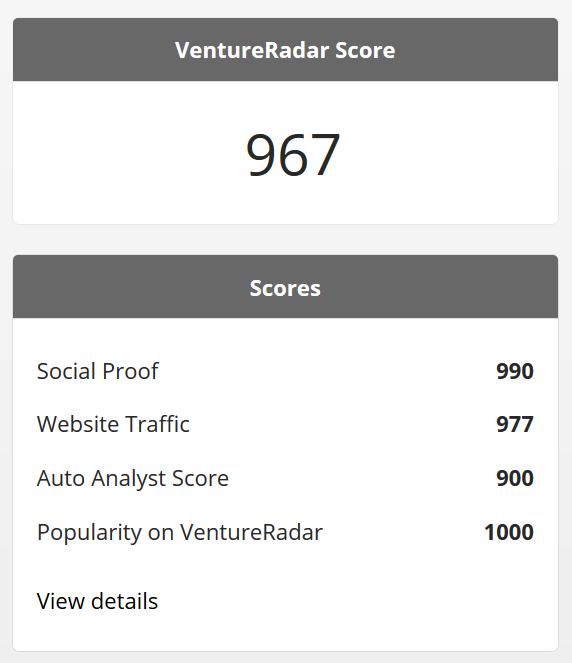 The Social Proof score is our measure of how much industry recognition a company has received (a more general definition of the concept of Social Proof is here). The score is a quick way of assessing the collective industry view on a company, and takes into account factors such as positive news coverage, industry awards, funding raised, etc.

What these factors have in common is that someone has made a judgement about the company, and that judgement has been positive. For example an investor has decided that the company is worth investing in, a journalist has decided the company is interesting enough to write about. Our scoring algorithm also takes into account more nuanced aspects of this approach, such as the quality of the investor or publication, and how recently the judgement was made, among other factors.

The Social Proof score each company is given is relative to all the companies that VentureRadar tracks, on a scale of 1-1000, with companies closer to 1000 having stronger signals of social proof.

The Website Traffic score measures how popular the company's website is relative to other companies on VentureRadar. The score is given on a scale of 1-1000, with companies closer to 1000 having more popular websites.

It’s worth noting that website popularity is more important to companies in certain industries than others. A very successful social network company will have a high traffic website, however an equally successful semiconductor company is likely to have a much lower traffic website. For this reason it is often best to compare website traffic between companies in the same industry to build up a picture of what is a good score for that type of company.

The Auto Analyst Score uses a VentureRadar algorithm to simulate how a human analyst might rate a company from an assessment of its website.

We think this is equal to the quality of what a Junior Analyst would produce from spending a few minutes on the company website and answering the question “Does this company seem to be in good health?” The Auto Analyst considers similar factors that a human would consider when making this judgement.

The Auto Analyst score (between 1 and 1000) a company has does not depend on the score of other companies that VentureRadar tracks (so in theory all companies could have high Auto Analyst Scores). It also does not consider the traffic a website has, only the content of the site.

Popularity on VentureRadar measures how popular a profile is relative to other companies on VentureRadar. The score combines profile views, clicks and the number of times the company appears in search results.

The score is given on a scale of 1-1000, with companies closer to 1000 being more popular on VentureRadar.

When you export search results you can filter and rank the companies using these the VentureRadar Score and Sub-Scores. Free Subscribers can export 10 company records per export, and it’s easy to upgrade this number with a paid subscription.